I recently purchased a monitor for my home setup and was looking for a fun side project to work on. I had some spare WS2812 leds lying around and an arduino which I used for my Music controlled LEDs project. One post on r/battlestations caught my attention and I decided to mod my monitor with a ambilight. I was familiar with some software but making it work on mac os was a bit challenging. Before I explain how I accomplished that here's a video of the ambilight in action.

This is a list of hardware components used and the links to buy them. Note that I bought most of the electronic components from China using banggood.in as they were considerably cheaper. You can source them locally if you dont want to wait for the components. I also brought a soldering iron, set of wires and other electronic items like breadboard but you can probably use the one's you already have lying around. If you don't have these, search for the cheapest one's on banggood and buy them. I'll also link the ones I bought in the end.

Wiring up the LEDs

Wiring up the arduino to the LEDs is pretty simple. The WS2812 LED strip has 3 input pins.

Testing the LED's with Arduino

Since we have already wired up the arduino and the LED strip we can test the LED's using the FastLED library. Download it from arduino IDE and run some sample code. To check follow this steps

Once we have made sure the LEDs work we start with the installation of Hyperion software. This software makes it easy to run the LED ambilight based on the colours being displayed on the screen. The software can be easily installed on Linux but takes some tweaking to run on MacOS. Follow the instructions provided here or clone my forked repo directly from here after copying the files from repo follow these steps.

Hyperion works with different devices like Adalight, Philips Hue etc. What we want to do is emulate the AdaLight device using Arduino. This can be done with the help of an arduino sketch from here. Flash this sketch to your arduino device setting the correct DATA PIN (9 in our case) and BAUD RATE.

Apply LEDs along the edge of your monitor. Make sure you count the number of LEDs along each side. I was reusing a LED strip I had cut previously so I had to do a little bit of Soldering, try to avoid soldering strips because it's really hard. If you still want to do it search for the video on youtube to get idea on how to do it. WS2812 can be directly applied by removing the sticker on the back. The glue holds well and you should face no problems, I had to use a double sided tape because my adhesive was all worn out. Once you've done that you can connect the terminals as we discussed earlier using the wires we got and the connector on the LED strip.

Download Hypercon which is a GUI tool to generate Hypeion Config file. Hyperion config file tells arduino which LEDs correspond to which part of of screen and their relative positions. Hypercon makes it very easy and intuitive to generate a config file for your configuration.

For reference my HyperCon config looks something like this 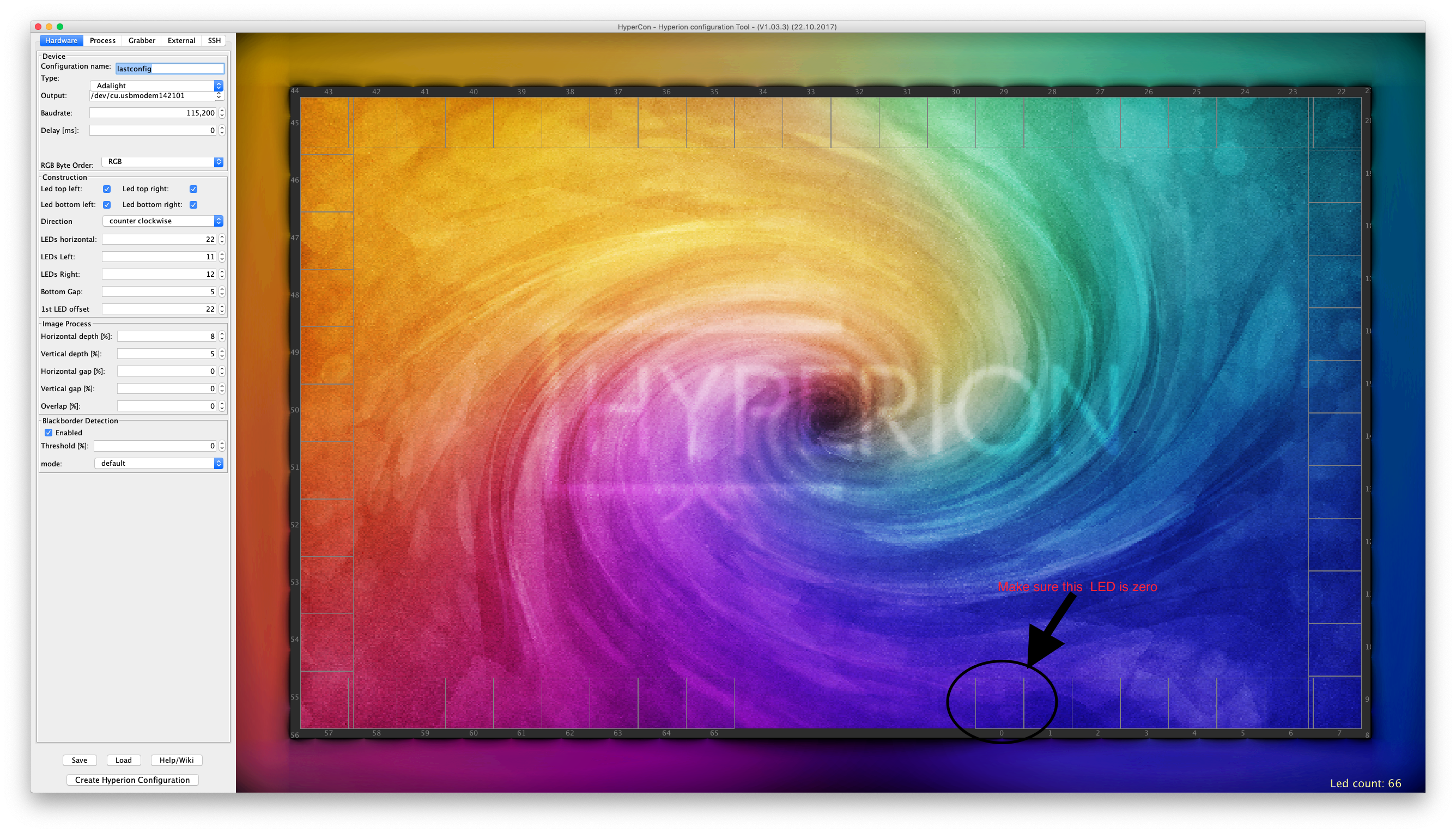 Now since everything is setup we should be able to run our ambilight. Start the hyperion daemon with the configuration file we have generated using this command

hyperiond <location-of-config-file>
This should make your ambilight light up and match the screen. If you face some issues check the port you have given in configuration file.

This post is heavily inspired by this blog which uses raspberrypi to accomplish the same task. Do give it a look if you want in detail treatment of this whole project. I've kept this mostly simple and easy to implement. For more information feel free to contact me at my email.

So I had to re-configure the the Ambilight after coming back from home due to some issues. This time I decided to explore some of the other settings in HyperCon. The two settings which I feel are important are colour calibration and black edge detection. I'll explain them in detail below.

This post is heavily inspired by this blog which uses raspberrypi to accomplish the same task. Do give it a look if you want in detail treatment of this whole project. I've kept this mostly simple and easy to implement. For more information feel free to contact me at my email.